Author: Matthew Allcock and Robertus Erdélyi at the University of Sheffield.

The magnetic field in the solar transition region and corona is amongst the least understood but the most significant features in solar physics. As the coronal magnetic field is relatively weak and the plasma is optically thin, it is difficult, and often impossible, to directly measure the magnetic field vector field in the transition region and corona using traditional methods such as Zeeman splitting [1]. Thankfully, we can harness proxy information to do a better job by means of solar magneto-seismology (SMS).

Magnetohydrodynamic (MHD) waves, that permeate almost all solar structures, provide us with one such proxy. Ingenious SMS techniques have utilised observed MHD wave parameters including frequency, period ratio, and damping rates to diagnose the magnetic field in a variety of solar atmospheric  structures. One characteristic of MHD waves in magnetic waveguides that has not yet been utilised is how the associated wave power is distributed across the structure (the transverse eigenfunction) – in particular, the (a)symmetry of the waves.

What are asymmetric MHD waves?

Theoreticians like symmetry – it makes their lives easier. As a consequence, we have become familiar with wave mode identification in terms of the traditional kink and sausage MHD modes in idealised and symmetric structures. For example, see Figure 1, show a symmetric plasma slab oscillating with a symmetric kink and sausage surface modes, respectively. These animations were created using Mayavi2 and over 100 more animations of MHD eigenmodes can be found at the SP2RC research group website.

These wave modes map reasonably well to observations, but are based on the simplistic assumption that the waveguide is symmetric (reflectional symmetry for Cartesian structures and axisymmetry for cylindrical structures). It is likely that the highly inhomogeneous solar atmosphere supports structures that are asymmetric, such that the plasma parameters on one side of the structure differ from those of the other. Likely candidate structures are elongated magnetic bright points (see Figure 2), prominences, and light walls, which are ensembles of surges and other magnetic phenomena above sunspot light bridges (see Figure 3). MHD waves guided by these asymmetric waveguides can therefore also be asymmetric.

We categorise these asymmetric MHD waves as either quasi-kink or quasi-sausage modes, depending on whether the opposite boundary oscillations are in phase or in anti-phase [5]. This nomenclature is chosen to emphasize the difference to their symmetric counterparts, namely that several properties intrinsic to symmetric kink and sausage modes are blended when this symmetry is broken. For example, the quasi-kink mode does not conserve the cross-sectional width of the waveguide.

Asymmetric eigenmodes can exist as either surface or body modes, depending on the equilibrium parameter regime of the waveguide, its environment, and the form of the initial perturbation [5]. For example, shown in Figure 5, the first two orders of fast quasi-kink and quasi-sausage body modes, where we also depict areas of high and low perturbed density in red and blue. Note that body modes are not significantly affected by asymmetry in the background plasma.

A novel technique for solar magneto-seismology 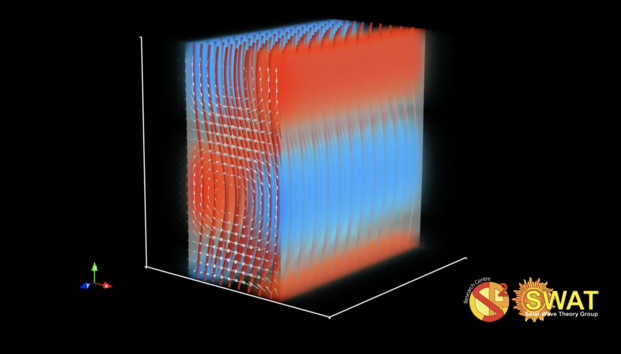 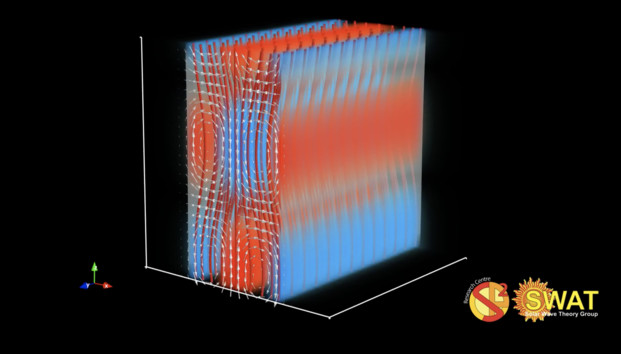 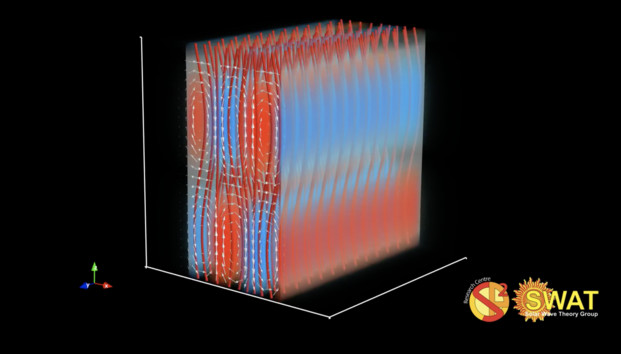 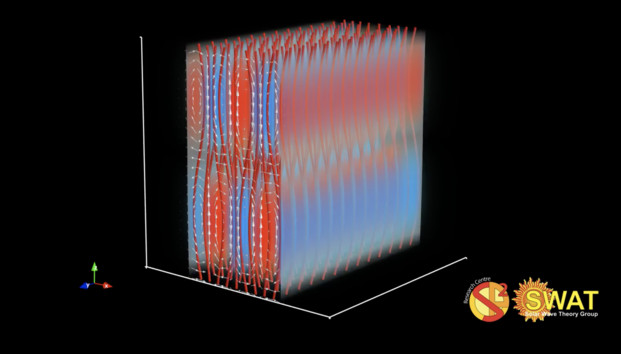 Figure 5. Quasi-kink (left column) and quasi-sausage (right column) body modes of an isolated slab of plasma. The areas of high and low perturbed density in red and blue. The red tubes depict the internal magnetic field lines. Click for the movies.

How can we quantify the asymmetry of MHD waves? One method that we have developed at SP2RC involves taking the ratio of the amplitudes of the transverse oscillations on the structure’s opposite boundaries.

We model Cartesian structures in the solar atmosphere by a magnetic slab of plasma embedded in an asymmetric background plasma . By taking the amplitude of transverse oscillation, which is distributed non-uniformly across the structure, one can find that the amplitude ratio as a transcendental function of the density, temperature, frequency, wavenumber, and internal magnetic field strength, whose explicit form is given in [6], and depends on the type of wave mode observed.

In theory, the amplitude ratio, period, and wavelength of the asymmetric wave, and the density, temperature, and spatial scale of the background structure, can all be measured (granted, some more easily than others). From the amplitude ratio, one may make an estimate of the magnetic field strength within the structure. For wavelengths much longer than the width of the structure, this inversion can be completed analytically to give the magnetic field strength inside the structure. Alternatively, and more accurately, the inversion can be made without approximation using a simple numerical procedure [6].

We have developed a technique that, for the first time, exploits observations of asymmetric MHD waves to diagnose the solar atmosphere’s elusive magnetic field. We anticipate that the improved spatial resolution of next-generation solar instrumentation, including DKIST and EST, will be sufficient to resolve the cross-sectional wave distribution of solar structures sufficiently to employ the amplitude ratio technique described above.

The main limitations with this technique lie in its simplicity – alas, solar atmospheric structures are not so simple! The infancy of this technique’s development mean that there are a number of exciting avenues for improvement, making it a promising new technique for furthering our understanding of solar magnetic fields.